Hobby drones are taking off in the Lodi area

A couple of decades ago, the idea of using a small unmanned aircraft to take video would have been limited to science fiction movies or TV shows.

But — like smartphones, VR headsets or 3D printers — drones are becoming a lot more commonplace.

Breaking into the fast-growing hobby is a lot easier than it used to be, too.

“You should probably try to start out smart and cheap,” said Jim Oliver, a freelancer designer from Woodbridge who owns ShadowQuad.com. Through his website, he offers aerial photography, video and imaging, along with making 3D-printed parts and accessories for hobby and commercial drones.

New hobbyists can start with something like a Parrot Bebop — new models are in the $400 range, and used or older versions often run cheaper — to get a feel for using a drone. That model is pretty advanced and has a digital stabilization system for the camera, Oliver said.

“That has a very, very good lens,” he said. “The quality is amazing.”

Then, they can play around with the capabilities, see how it can be used, tinker with it if they want, and upgrade if they enjoy it.

It’s also a much cheaper investment than some other hobby drones — which can run in the $1,200 range or higher — if anything happens.

Mark Huntley has been an RC plane and helicopter hobbyist for about 35 years, and joined the Tokay RC Modelers more than a decade ago.

He got into drones about a year and a half ago, and found them much easier to fly. For example, to hover anywhere with a radio-controlled helicopter takes some effort. The pilot has to constantly adjust for factors like wind, he said.

A decent hobby drone, however, automatically adjusts to things like air flow.

“There’s no effort into controlling it once it stops,” Huntley said.

Huntley has used his drones to fly alongside radio-controlled aircraft and take photos and video for the Tokay RC Modelers.

With the ubiquity of the Internet, it’s an easy hobby to get involved in, he added. While there is a large hobby shop in Sacramento, RC Country Hobbies, it can be easier to find what you need online.

In fact, people can even download designs to 3D print their own models.

They’re fun for photography, Huntley said, but there are other uses for drones, too.

“Other pilots are starting to get into drone racing,” he said.

Huntley has been able to take some incredible video in natural areas. He took advantage of the winter’s wet weather to travel to Lake Berryessa.

For the first time in more than a dozen years, the lake filled up enough that water reached the edge of the large pipe spillway that rises above the lake’s surface, and spilled in.

“I flew a drone right over the top of that where you can see the water flowing down into the hole,” he said.

Drones are great for shots like that, Huntley added.

“They give you that perspective you don’t normally get to see,” he said.

When Oliver first began playing around with drones a few years ago, Barnes & Noble was selling a low-priced model. He wanted to see how high it would go.

The answer? Beyond his WiFi connection — a problem that rarely occurs in newer models, he said.

“It was an older drone and it just took off and did its thing,” he said.

The drone was lost, though it kept taking video.

“It lowered right down into this cul-de-sac. And I (was) looking all over the place — in fact, there’s one shot where you can see my car go past,” Oliver said.

It hovered for about 10 minutes near a man mowing his lawn, who stopped the chore to check out the device, then to point its camera toward street signs in case its owner was watching from the other end.

When it was clear he wasn’t, the man put flyers in mailboxes reporting his find.

Thanks to the good Samaritan, Oliver was able to recover the drone (and the hilarious video).

Know what not to do

Oliver offered a few tips for anyone new to drones.

For example, it’s a good idea to find out where drones are allowed. Oliver goes to Kingdon, where there’s an airfield for RC clubs to use. The Tokay RC Modelers use an airfield in Walnut Grove.

It’s good to log a few hours at fields like that before heading to anywhere tricky to fly, he said.

“They’re really simple to fly, but they can still tend to crash if you don’t know what you’re doing,” Oliver said.

The Federal Aviation Administration, National Park Service, a few cities and other agencies have bans on flying in some places without the proper licenses (or sometimes at all), so sometimes research is in order.

In cities, the steel and glass in tall buildings can cause problems with the GPS and WiFi signals drones use to navigate, and sometimes they can spin right out of the sky, Oliver added. He’s invented a parachute to help protect them from damage, but newcomers may want to avoid areas with skyscrapers at first.

It also pays to be careful around crowds of people. Not only could a falling drone injure someone, but a lot of people become angry if they think a drone pilot is filming them.

“They don’t like drones,” Oliver said. He’s been chased out of parks before, even when he’s just looking for an open place to get a feel for a new piece of equipment.

“There’s still a lot of animosity toward it,” he said.

More than a hobby

Huntley doesn’t just fly drones as a hobby. He’s also used them in his work at Clark Pest Control, where he serves as the corporate pilot.

“I have my commercial drone license, which allows me to use my drone in a commercial use,” he said.

Pests don’t stay on the ground, so Clark employees often need to check customers’ roofs for damage or infestations. Birds can also nest up there and cause plenty of problems.

They used to need a ladder and other equipment to climb up there — which could be dangerous, if pests had badly damaged roofing.

“The company is always looking for better and safer ways of doing things,” Huntley said.

With camera and video capabilities on hobby drones offering excellent quality, they became a much faster, safer way of checking roofs for problems.

Oliver also uses his drones commercially. He creates websites for several local construction companies, and has created aerial photos, videos and even 3D models for them. He also uses modified cameras to scan farmers’ fields, creating huge “stitched” images that show photosynthesis activity, water and fertilizer use, and more.

But ShadowQuad.com is where he really gets to shine. Along with parts for drones, he sells his own inventions, such as the parachute he created. Right now, he’s working on an invention that would be available to fire departments — a small, drone-mounted flamethrower that could be used to combat dangerous forest blazes by lighting backfires.

There are other ways drone pilots can make cash. Nowadays, many real estate companies employ pilots to film aerial tours of property or even inside homes.

“It’s turning out to be quite a little moneymaker. There’s a lot to learn from it,” Oliver said.

In fact, amateurs can jump on the website DroneBase.com and find businesses looking for drone photos and film footage. If the business approves the pilot’s work, they get paid a set fee.

“You could literally drive around all day long and do it,” he said. 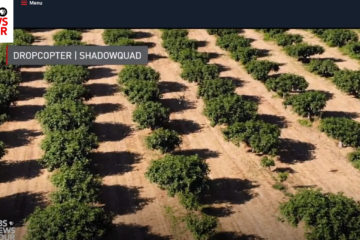 As bee populations decline, can technology help fill the gap?

Shadowquad and Dropcopter featured on PBS Newshour By William Brangham Humans rely heavily on pollinator bees to sustain food production globally. But for decades, the insects’ population has declined, in part because of pesticide use. Read more… 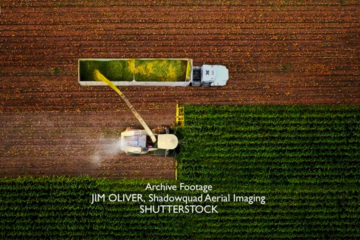 See the video here: https://www.bbc.com/reel/playlist/follow-the-food This is an excerpt from the BBC documentary “Follow the Food” in which Dropcopter and Shadowquad’s aerial footage are featured for agricultural drone pollination… Farming is facing far more fundamental Read more…

This was filmed in Lodi, California while pollinating apples for the Grupe Operating company. In a documentary on the collapse and decline of the bee population. Dropcopter provides assistance to the growers by showering the Read more…